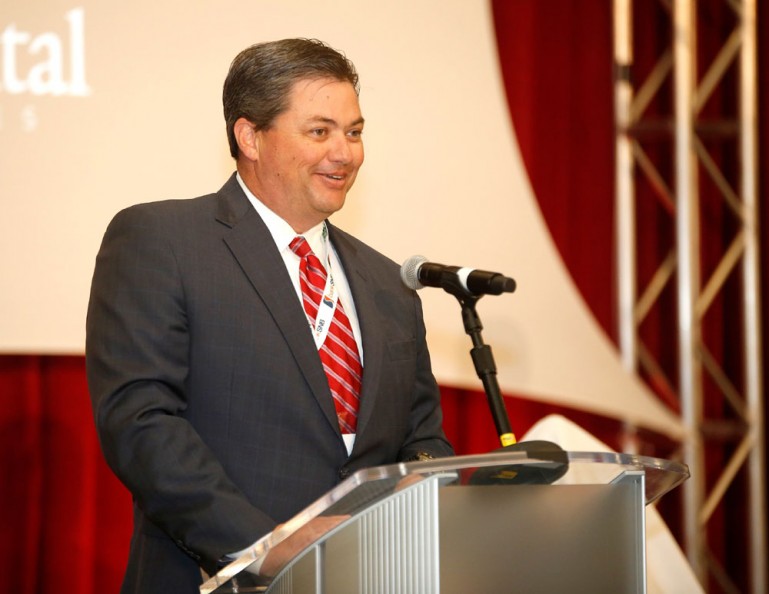 The high-water mark of OIPA’s success during the 2017 legislative session was Senate Bill 867. That bill expands long laterals into non-shale formations, allows spacing units larger than 640 acres and protects rights to elect by the layer or formation, which has not previously been possible in Oklahoma with forced pooling.  New OIPA President Tim Wigley said there were a number of OIPA members who took part in the process to get that legislation. It was a complicated issue, he said, highly technical, involving dozens of meetings with stakeholders of all types.

“We wouldn’t have gotten this done without the help of a lot of people, but especially Chad McDougall,” Wigley said of a process that had many twists and turns and had failed in previous years.

For his work shepherding the legislation through, serving on long-lateral committees and helping to coordinate the efforts of various groups, OIPA presented Chad McDougall with the 2017 Member of the Year Award at the Annual Meeting. “I’m honored to receive this award,” McDougall said. “It takes the effort of a lot of folks to get things like this done.”

We’ve probably had more than our share of challenges getting this done, McDougall said.
McDougall pointed to the work of Hollye Hunt, other OIPA staff members and the contract lobbying team of Milner-McSpadden-Robinson, as well as the work of OIPA members like Harold Hamm and Blu Hulsey at Continental Resources, in getting the bill passed. “It takes many hands to make light work,” he said. “This has been a really long process,” he said, going back to 2011 for the beginning of multi-unit drilling, and back 10 years or more on the efforts for expanded spacing. “I enjoyed the process this year, sitting down and working with OKOGO and COSMO and all the people at OIPA and working towards a common end.” The legislation was about creating jobs, McDougall said. “Oklahoma is a state that has a process that really lends itself to small companies coming forward,” he said. “ … You have an interest, you can cause a well to be drilled. There were some parties who didn’t want it to be that way anymore. I thought it was really important that OIPA stood up and protected that.

“You look at the influx of all these private equity companies and startups, if this was a state where you had to have 50 percent to get something done, that wouldn’t be possible.

“I enjoy the process. The possibilities of what you can do are endless if you get involved.”