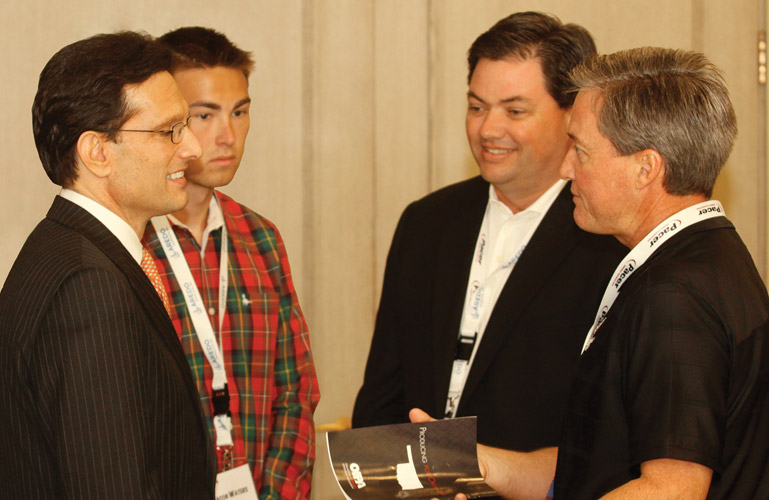 Leader Gets By with Help from OIPA Friends

“It feels good to be with friends,” U.S. House Majority Leader Eric Cantor said as he spoke before a group of donors prior to delivering the keynote address at the OIPA’s Annual Meeting in 2013. U.S. Rep. Cantor, R-Virginia, was joined by Oklahoma U.S. Rep. James Lankford.

“James and I are on the battlefield up in D.C., and it’s fierce and they know how to play,” he said.

Cantor talked about the partisanship with which Washington is beset these days, and outlined a Republican agenda hewing to traditional conservative principles as a plan for
moving America forward.

The majority leader spoke of a question asked in many polls taken after the 2012 presidential election: “What was the most important attribute of the candidate you voted for?”

Cantor said the most common response, more popular than the candidate’s vision for the future, his values or his leadership potential, was: “He cares about people like you.”

“It’s like that old adage: people don’t care what you know until they know you care,” Cantor said.

“Taking that and overlaying the undecided voters, the people who swung the election in 12 battleground states like Virginia, Obama got 81 percent. That goes to show we’ve got some work to do.”

“As conservatives, we believe in giving people opportunities. It goes back to Jefferson and Madison and what’s in the founding documents. We are about guaranteeing the pursuit of happiness. No one ever guaranteed anybody happiness, but we have created the conditions in this country that allow for more pursuit and more finding of happiness than anywhere else in the world.” Cantor said conservatives were caught on their heels, pinned into a corner by an opposition that says conservatives won’t compromise, won’t talk about anything else, and all they want to do is make cuts and take things away from people.

“We know you can’t continue to spend like this; that’s pretty obvious. But we also know that message has been lost somehow and we’ve got to be able to get it out to people again.”

Cantor said higher education is rapidly becoming just an option for the upper-middle class and the wealthy.

“If you look at the numbers, student debt has reached almost $1 trillion in this country, an average of $23,000 per student, and 40 percent of the households led by people 35 and under have student debt. We want to be that country that is upwardly mobile, about a ladder of success, but we’re going to end up with a lot of young people who don’t’ have the wherewithal or the tools to even get up on that ladder.

“We as conservatives believe very strongly that we need to be about empowerment; we need to be about helping people have the tools they need to go help themselves. It’s an exciting time to delve into some of these policy solutions. It’s not without rancor, and I know we could all do with a lot less of that, but it is what it is in Washington, and somehow that’s what makes politics in this country.”