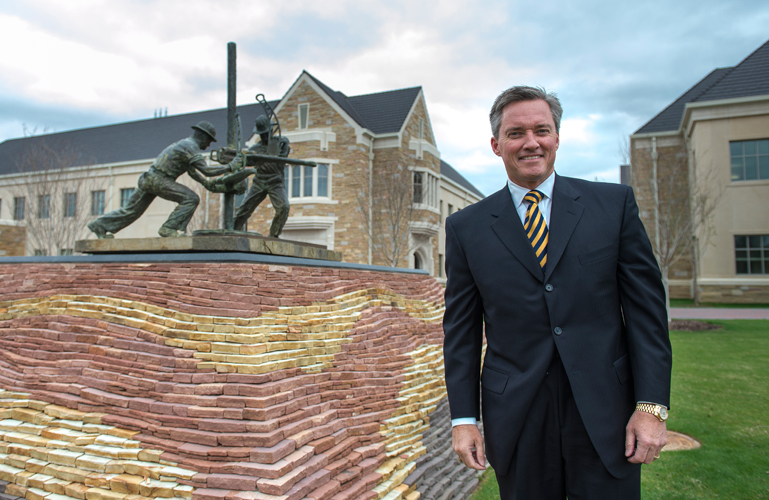 The University of Tulsa and the College of Engineering and Natural Sciences proudly announce the naming of the McDougall School of Petroleum Engineering.

Jeffrey J. McDougall, President and founder of Oklahoma City-based JMA Energy Company, on Oct. 13 2010 announced his strategic investment in the Petroleum Engineering program in the College of Engineering and Natural Science.  To honor his support and his success, the university has renamed the program the McDougall School of Petroleum Engineering.

“My gift to TU represents not only funding, but also an ongoing relationship,” said McDougall, a 1984 alumnus from the petroleum engineering program. “In my experience, the human element has always been the key to success, and I’m excited about working to help align people and support around the McDougall School of Petroleum Engineering.”

TU President Steadman Upham said McDougall has been an adviser, mentor and advocate for the petroleum engineering program that now bears his name.

“Jeff’s dramatic success with JMA Energy illustrates his tenacity and his ability to rally talented people around a mission. We are confident that his talents will bring many advantages to our petroleum engineering enterprise, and we look forward to partnering with him to shape the next century of engineering excellence at The University of Tulsa,” Upham said.

This announcement marks a new era for The University of Tulsa as it reaffirms its commitment to a world-leading petroleum engineering program. With new resources and new energy, the McDougall School of Petroleum Engineering will produce the human talent and industry knowledge to address America’s energy needs well into the future.

Jeffrey J. McDougall (BS ’84) is President and owner of JMA Energy Company and its affiliates headquartered in Oklahoma City. Founded in 1986, JMA Energy Company is a leader among Oklahoma’s independent oil and gas companies. Prior to founding JMA, Mr. McDougall worked as a Petroleum Engineer for Triad Drilling Company and as a consulting Petroleum Engineer.

Mr. McDougall is an active member of the Oklahoma Independent Petroleum Association (OIPA) and serves as a member of its Board of Directors and Executive Committee.

Mr. McDougall earned his bachelor’s degree in Petroleum Engineering from The University of Tulsa and has served on its Board of Trustees. He also serves on the Board of Directors for both Special Care, Inc. and the Harold Hamm Oklahoma Diabetes Center in Oklahoma City.