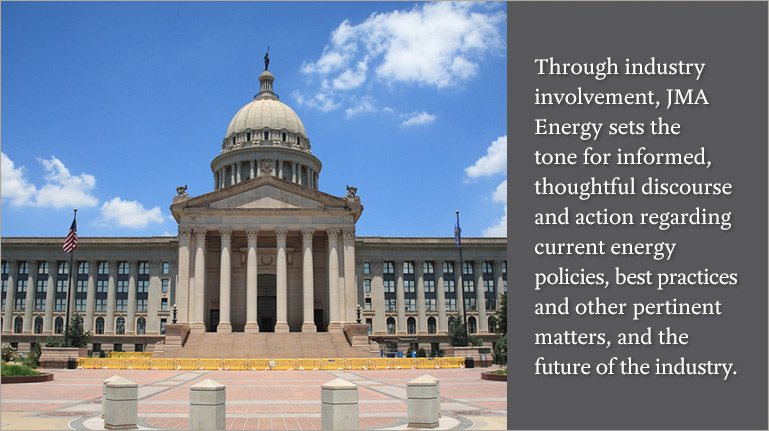 JMA employees are active in membership and leadership roles in organizations and associations that support and advance the responsible exploration and production of oil and natural gas throughout Oklahoma and the Mid-Continent.

JMA Energy president and owner Jeffrey McDougall has provided testimony before the U.S. Senate and congressional committees in support of independent producer issues, and served on the energy advisory committee for 2012 Republican Presidential nominee Mitt Romney.

JMA Energy is deeply invested in working to achieve domestic energy independence. Through the OIPA Wildcatters Club, JMA Energy supports independent energy companies’ efforts at the Oklahoma state legislature, the Corporation Commission, and other governmental bodies where our business interests are affected.  Since 1978, OIPA members in the Wildcatters Club have contributed to help accomplish objectives that can be too time-consuming or too expensive for individual producers to accomplish on their own. The Wildcatters Club enables the OIPA’s political action committee, OKIEpac, to impact state legislative races. OKIEpac has worked to prevent negative legislation from passing while pushing for laws that improve business opportunities for independent producers.

JMA Energy also strongly supports OIPA’s efforts to strengthen independent producers’ voices through the OIPA Federal PAC and a Washington, D.C.-based lobbyist representing the industry’s interests. That representation at the nation’s capital gives Oklahoma’s independent producers a stronger voice in federal affairs, and allows us to work with other states that face the same issues.